Adding Machine Musical is now completely sold out for the entire run EXCEPT for additional matinees on Wednesday 12 October and Wednesday 19 October at 3.00pm.

After 25 long years spent adding figures in the same soul-crushing job, Mr Zero suddenly finds himself replaced by a machine. For the first time in his life, Zero takes his destiny into his own hands. The consequences set him on a path through this world and beyond, offering him one last chance for love, life and redemption.

Take an extraordinary journey with Mr Zero in this stirring and hilariously dark anti-musical as it asks us to consider the true price of a human soul, told through Joshua Schmidt’s haunting score, inspired by gospel, opera, jazz and rock and roll.

The UK premiere of Jason Loewith and Joshua Schmidt’s multi-award winning musical adaptation of Elmer Rice’s groundbreaking 1923 play is directed by Josh Seymour, named Best Director at the 2016 Off West End Theatre Awards for One Arm at Southwark Playhouse.

FREE POST SHOW DISCUSSION ON WEDNESDAY 5 OCTOBER 2016
What is the future for new musicals in the UK and the US? At a time when ticket prices are higher than ever and the need to cast stars seems increasingly urgent, how can creators of new musicals balance these pressures with their need to experiment and innovate? This discussion, featuring experts and artists of varied backgrounds and experiences, will explore whether there is any place for musicals that challenge and develop the form in today’s testing theatrical climate.

This event is free to ticket holders for the Wednesday 5 October performance.

This event is free to ticket holders for any performance of Adding Machine: A Musical.

About the Composer and Co-Librettist

Co-Librettist Jason Loewith won Lucille Lortel, Outer Critics Circle and Jeff awards for Best New Musical for Adding Machine: A Musical, which he co-wrote with composer Joshua Schmidt. His other writing includes Big Nate: The Musical and The Director's Voice, Volume 2 (published by TCG). Since 2013, he has been Artistic Director of the Olney Theatre Center outside Washington DC where he has directed the rolling world premiere of Steven Dietz’s Rancho Mirage as well as Marjorie Prime, Carousel, How to Succeed in Business Without Really Trying (Helen Hayes Award nomination for Best Direction) and Avenue Q. Recent regional work as a director includes the world premiere of Broke (Alliance Theatre, Atlanta), Time Stands Still (Everyman, Baltimore), Crime and Punishment and Working It Out (Center Stage, Baltimore), Adding Machine: A Musical (Studio Theatre, Washington DC) and a dozen plays for Chicago’s Next Theatre Company where he served as Artistic Director from 2002-08, including the Chicago area premieres of Dying City, Defiance, The Long Christmas Ride Home and Fabulation. He conceived and directed the world premiere of The American Dream Songbook, wrote and directed the world premiere of War With the Newts and produced Chicago premieres by Caryl Churchill, Suzan-Lori Parks, Carson Kreitzer, Sam Shepard, Dael Orlandersmith and many more. He is a three-time grantee from the NEA for Artistic Excellence, a recipient of support from the Rockefeller MAP Fund and MacArthur’s International Connections Fund and a TCG New Generations Future Leaders grant. Before joining the team at Olney Theatre Center, Loewith proudly served four years as Executive Director of the National New Play Network and five years with Classic Stage Company Off-Broadway.

Playwright Elmer Rice (1892-1967) was noted for his innovative and polemical plays, best known for Street Scene (1929), a starkly realistic tragedy set outside a New York City slum tenement building, which won a Pulitzer Prize and was adapted into a highly popular musical with lyrics by Langston Hughes and music by Kurt Weill. His other plays include On Trial (1914), The Adding Machine (1923), Counsellor-at-Law (1931), We, the People (1933) and Judgment Day (1934). Rice was active in the WPA Federal Theatre Project in the mid-1930s, and also championed the American Civil Liberties Union and the cause of free speech and in the 1950s he was an opponent of U.S. Senator Joseph R. McCarthy. Rice also wrote several novels and an autobiography, Minority Report (1963).

Producer Alex Turner produced One Arm at Southwark Playhouse in 2015. As a founding Artist and Producer of award-winning interactive theatre company non zero one, Alex has co-devised and produced productions at the Barbican, National Theatre, Bush Theatre, Southwark Playhouse, Science Museum and the Edinburgh Fringe. Alex joined Playful Productions in 2014 as Production Assistant to work across productions including Wolf Hall and Bring Up The Bodies, Blithe Spirit, Wicked, Charlie and the Chocolate Factory, Shrek The Musical UK tour, Dirty Dancing, American Buffalo, The Audience, Kinky Boots and currently works on No Man’s Land and as Development Assistant. He has previously worked for the Barbican Centre, Theatre Delicatessen, Royal Shakespeare Company, Frantic Assembly and Kate Morley PR. For non zero one, Alex was also a visiting lecturer on the Undergraduate Drama and Theatre degree at Royal Holloway, University of London.

Associate Producer Effie Stevenson is Company Director of SDWC Productions Ltd, a theatre production company based in London's West End. She is currently producing four shows at the London Fringe during 2016 and is planning the Company's 2017 season of London shows. She is a recipient of a Stage One bursary for new producers, a member of ITC Arts, the Institute of Fundraising and the Institute of PR. Recent productions include Thoroughly Modern Millie (Landor Theatre), I'm Getting My Act Together And Taking It On The Road (Jermyn Street Theatre) and The Burnt Part Boys (Park Theatre).

The Press on the Off-Broadway Production of Adding Machine: A Musical

“Improbably brilliant, grotesquely funny, with music that gets under your skin and stays there” The New York Times

“Witty, high-reaching and provocative… the best new musical of its year” Time Out New York

The Press on Director Josh Seymour

“This compelling stage adaptation is brought to joltingly vivid life in Josh Seymour’s intelligent production.” Paul Taylor, The Independent on One Arm

“Josh Seymour’s production is intelligent and sensitive, studded with moments of tenderness and delicacy.” Natasha Tripney, The Stage on One Arm

“Josh Seymour has a great eye and vision, turning the piece into a filmic delight.” Philip Fisher, British Theatre Guide on One Arm

“It’s not often that I come away from a piece praising the director for putting together a 5-star cast, together with a striking set design, powerful lighting and harrowing music. But, as I left the theatre last night I made a note to check out all future work of Josh Seymour.” Faye Stockley, LondonTheatre1 on One Arm

Approximately 95 minutes with no interval

Producer
Presented by Alex Turner in association with SDWC Productions.

Theatre includes 1927’s The Animals and Children Took to the Streets (National Theatre and International Tour), South Pacific (National Tour), Cinderella in Into the Woods (Landor Theatre), Pianist and Musical Directorin Three Men in a Boat (National Tour), Mme Simone and MS in John Godber’s 20,000 Leagues Under the Sea (Hull Truck), Belle Moffat in Little Women (Duchess Theatre) and Bobbie Ellis in Losing Louis (Trafalgar Studios). She has worked with renowned conductor John Wilson and his Orchestra in The Good Companions and performed in several Proms for the BBC and at Abbey Road Studios. In 2009, she founded Christmas for Kids, a charity taking shows of storytelling, song and puppetry to children’s hospices at Christmas. 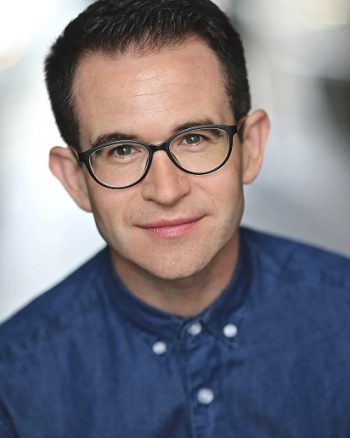 Productions at the Finborough Theatre include The Wallace. Theatre includes Otto Kringelein in Grand Hotel (Southwark Playhouse) for which he was nominated for an OffWestEnd Award for Best Male Performance and a Broadway World UK Award for Best Featured Actor in a New Production of a Musical, Timon and Zazu in The Lion King (National Tour), Benjamin in Joseph (Adelphi Theatre and National Tour), Schlomo in Fame, Rick in A Slice of Saturday Night and Ko-Ko in The Mikado (International Tour).

Approximately 95 minutes with no interval