by Edie Campbell and Jack Lynch

The London premiere of a new play

An actress decides to write a one-woman play about her favourite poet, Emily Dickinson, and finds herself on an unexpected journey: when is a biographical portrayal not autobiographical?

Emily Dickinson and I, formerly titled My Life Has Stood, premiered at The Mill Studio, Guildford, on December 9th 1999.

About The Director Jack Lynch

Jack Lynch has BA and MFA degrees in Theatre, with an emphasis in movement and performance, from The Naropa Institute, Boulder, Colorado, and the University of Iowa, Iowa City, Iowa, respectively.  Jack is a freelance tutor, director, and movement/acting coach.  He has been guest lecturer in movement, improvisation and acting at the Central School of Speech and Drama (ATP Course and Summer Courses), and has taught at Circus Space and the Arts Educational Schools London.  He has directed collaborative-devised theatre and dance projects in Iowa, New York and London.  Stage work include Beadle Bamford in Sweeney Todd, George in Sunday in the Park with George, Jack in Dancing at Lughnasa, El Gallo in The Fantasticks and developing the role of Mack in Ann Bogart's Marathon Dancing.

The Press on Emily Dickinson and I

"Edie Campbells subtly charismatic performance. The transformation is uncanny: this journey of a portrayal has a richly suggestive arrival" Sarah Adams, Time Out

“Campbell's performance is ingenuous in spirit and well-crafted in form. Jack Lynch directs with lucidity which allows the actress devotion to her subject to shine through without surfeit, inspiring the enthusiasm of the audience." Alexa Baracaia, The Stage

"Fascinating. This is yet another perfect evening in the theatre. It is an evening that commands attention and that led, quite naturally, to enormous appreciation and applause. Go." Paul Nelson, Wandsworth Borough News 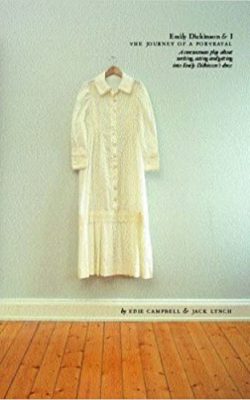 Emily Dickinson and I – The Journey of a Portrayal

by Edie Campbell and Jack Lynch